I am concerned about legislation introduced and planned for introduction in 2008 by State Senator Owen Laughlin of Woodward and others. The legislation concerns inmates in county jails and financial responsibilities for pre-existing medical conditions. Links at the bottom of this letter include the recent court decision and area news articles on this matter.

On the surface it makes a great deal of sense that counties shouldn’t be responsible for a candidate’s cancer because he happens to get incarcerated. . . . 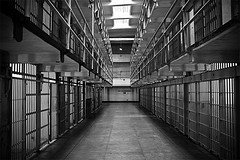 On the surface, the goal of this legislation is to place the responsibility on the inmate. But precisely because the inmate is incarcerated, he is no longer able to generate income for such expenses and faces depriving family members, already burdened with loss of income, with additional loss of assets. It is the equivalent, if you will, of visiting the sins of the fathers upon the children – something that, in this civilization, we are not supposed to do. The counties have, by incarcerating these prisoners, obviously assumed general responsibility for them, the way a ward of the court would be a responsibility of the court. We have a responsibility to continue to manage prisoners with justice, and that justice includes proper care-taking for their health.

Winston Churchill said “We judge a civilization by how it treats its prisoners.” Jesus Christ said, “I was sick, and ye visited me: I was in prison, and ye came unto me.” We must judge the counties by how they treat their prisoners. We must judge ourselves by what it is we visit upon them when they are sick. I think I need not point out that this legislation may disproportionately affect the poor, and so it’s fair to say that this is not merely an issue of fiscal and financial justice, but of moral and social justice as well. The canard of “well if you want to get free medical treatment, just commit a crime” could just as well be used to deny them free food, clothing, and other basic care. In essence, prisons have always been simultaneously a form of charity as well as justice, aimed at reform and civilization as much as punishment.

As I understand it, hospitals cannot turn away patients, regardless of ability to pay. So it seems to be a question of whether counties, who can pay by raising taxes, or prisoners, who generally can’t pay, are stuck with the bills in question. I can’t help but think that in either situation, ultimately, if the pressure is not relieved, we will start to see inmates get less than proper care, their health deteriorate, and our jails a mediaeval place where the guilty go to suffer, languish, and die. That cannot be allowed to happen. Let’s take the example of a 39-year old man who is diagnosed with Leukemia, and it is determined that it is pre-existing, but his assets and savings are the primary means of support of his family. Do we really propose putting his wife and children out on the street to pay for his bone marrow transplant? His assets are essentially static, and he has been deprived, by incarceration, by the county, of the ability to generate income.

With hasty legislation, we run the risk of barbarous results and unjust consequences – something I know you and I could not countenance – especially in the wake of similarly hasty legislation on immigration in Oklahoma.

I ask you to urge more consideration, block hasty legislation, and propose compromises that attempt to do justice to all. Clinics all over Oklahoma do an income-debt-support analysis to determine an income-based fee for treatment. They take into account several crucial factors: 1. income 2. assets 3. dependents *** 4. other debts and then structure an appropriate fee. Something just along these lines could be a meaningful compromise to Sen. Laughlin’s approach. It should not be all or nothing. A single man with savings – I can see him paying the bill. A single man with nothing, or a man with a family supported by his assets, or a woman with children who would be affected by loss of her family’s assets, would be done an injustice by simultaneously burdening them with medical bills and preventing them from earning enough to satisfy them.

Thank you for hearing my request.