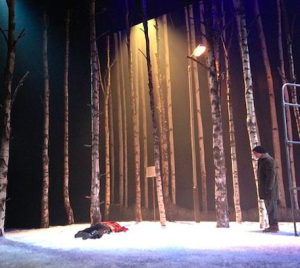 Where the two films are spooky and romantic, the play is heart-rending. The agony of longing and love in the two boys, one an old man who is still very much a boy, the other a boy (Oskar) who needs very quickly to come into manhood, is visceral. You can also feel the universality of need that trumps even sorrow, even grief and shame, in the girl they each orbit. The National Theatre of Scotland brings this one to Broadway (complete with Scottish accents) at St. Ann’s Warehouse in DUMBO.

The props and effects are what you expect in New York – stellar (notably the use of blood and the pool scene) – and the music, while recorded, is perfect, moving, and seamless. The use of modern dance to interpret not just transitional moments but also key acts of violence, feels exactly appropriate – there is drama and yet restraint. The interludes actually let you breathe between moments of action. The backdrop is stunning. The moment you enter the theatre – as it were, the snowy wood at night – with extras occasionally walking through, you are transported into anticipation and awareness that we are all experiencing a fairy tale of the old, transcendent kind we used to gather around fires and tell.

This is a one-off for St. Ann’s; it wasn’t in their annual program, but they got the opportunity and jumped on it, which was a good move since it’s going into an overtime extra month of showings! I got a side row of my own (3rd row from stage) in an otherwise sold out every night show to see Oskar and Eli on Oscar night (coincidence #1), for an explosive performance (makes you leap out of your seat at one point). Coincidentally, in fact, I left seat C-4 (as in plastic explosives) and came home to an explosion outside my office window (coincidence #2) – three explosions actually – as a car or two went up in flames. I was the first 911 caller, and I watched the fire department repeatedly struggle to quell the obviously unnaturally incendiary blue and orange flames. So a theatrical evening here.

This is why I go to the theatre – to be inspired to create art, and to live in it. Let the Right One In certainly did that. I love the films equally, too – no snobbery for the ‘foreign’ version. Now I’ll read the novel, I think, when I finish King’s The Regulators.