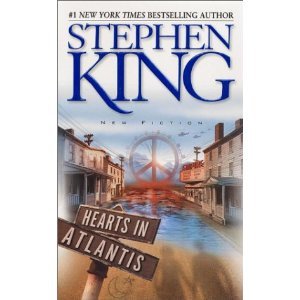 King’s book is really a number of stories in a cycle. The film is actually one of the stories, but not the title story – which means, if you watch the film, you never really learn what the title means. The film is fantastic, one of my most beloved, but I love the book separately and together with the film at once. I love both versions of the story.

This is also, as a whole, one of the books I love. I don’t say “I love this book”; everyone says that, of course, about books they enjoyed, the way they say it of a confection they have just finished. But that’s not what I mean, and this book is not merely this month’s confection. I love some stories, whether film or books, the way a man loves a woman, and yes I know what that is. This is one of those books. There are some really painful things in here. But it’s like having a friend and the friendship being busted up into a pile of debris – I think, along with a lot of readers who don’t need happy endings as much as we do a sense of life, that something goes on – that more than closure, we get persistence, that the friendship, like the book,  is worth it. Friendship is so rare and precious, that even if it’s like a pile of broken glass, I want it, all of it – shards and all. I want books like this in that same way.

This is also one of those books I think you can read after you’ve watched the film, with it not being spoiled. Not because the film story – Low Men – doesn’t end the same way, but because the richness the author creates in the text embellishes the film experience in such a way that, if you’re capable of experiencing art this way, lets you sort of live the film differently in the past. It lets you time travel, rather than feeling like you’re re-watching the same film. At least that’s how I experience a lot of books, including this one. But I think you have to love a story, really love it, in the unspoken place of the heart, or you don’t get that.

Some people have been deprived of such an experience, as I had been for a number of years growing up, and think of the “heart” as a Hallmark card sentiment or Disney movie “message”. The heart doesn’t exist, or we can’t know what it is – it’s make believe. I know you – I was once one of you. All I can tell you is that they took it from you, took it from you when you were young, and you can get it back again. And it’s nothing like Disney or Hallmark – it’s nothing like when they say a movie “will touch your heart”. That still makes me want to vomit. But there is a heart, and it is an organ of the soul, given the metaphorical name of the beating organ that pumps your blood, and even connected to it, overlapping it, if you prefer, and connected to your will and your mind, which overlaps your brain and the rest of your body.

I don’t mean to condescend and say, “if you don’t like this book, you’re not enlightened, you have an impoverished soul, you have no heart”. All hearts are unique. I’m just saying that, this book operates in my heart, and the title doesn’t reflect saccharine sentimentality, but a kind of connection that’s possible with others, real or imagined, who also have hearts, even if some of them aren’t tromping around the world we consider visible, flattening the same turf. Take that how you like. Anyway, I like this book.