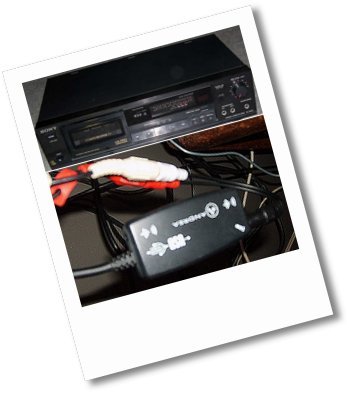 Success! I am transferring old speeches and lectures (from other people) from cassette to mp3. Both other tape recorders have mysteriously broken themselves since I last touched them, years ago. The pioneer receiver I grabbed from a thrift store doesn’t work. My Sony cassette deck has one of those enormous headphone jacks that no one uses anymore, and I long ago got rid of the adapter in a spring cleaning. You can’t just run the line-in to the line-in on the soundcard, without some amplification, even though I’ve got the twin-RCA to standard audio plug adapter to do it. Eureka! I dug out [a part] from a broken headset I’d once purchased as part of a voice recognition package. It takes a standard audio plug on the speaker side and passes it through with an extension, but the mic side it converts to USB. So plug cassette deck to cables that convert RCA to standard audio plug, plug that into this little adapter, and plug the resulting USB signal into the computer. It works! Perfectly! After some level tests, I’m listening to a cassette now, which is being recorded by Audigy for export as an mp3. The deck sits on a TV tray next to my desk, and it’s so nice to have this kind of cassette quality on a computer! I’m glad I didn’t throw that part away. Apparently just the adapter alone is going for $50 online, or $35 on ebay. Sweet – I think it basically has some pre-amp capabilities. It’s got a lot of juice, or it’s drawing it off the USB ports. I’ve got the level turned way down low, so it doesn’t overload, but it’s working for now. 🙂