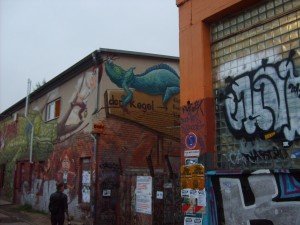 When I travel abroad, I always drink the Koolaid. Not every Koolaid, but the cultural Koolaid. It doesn’t mean I love every place I stay, or think that everything is better than what I find in the US, but I immerse myself in the culture as much as possible, while retaining my core eccentricities. My immediate goal when I travel is to inject myself as much as possible with, and inject myself into, the ordinary life of the place in order to grasp the essence of a culture and the meaning of it. The Irishman said cities are the same everywhere, it’s the truly local places, the neighborhoods that are unique. In at least one sense, too, though, the neighborhoods are the same. They have an internal life that has to be lived to be felt.

Even as a city though, I immediately felt a different beat in Berlin. I feel most at home there. Paris is overrated, as far as I’m concerned, as the number one tourist destination. Berlin, in nearly every way, feels more like a home to me. This is actually a touchy subject in Kreuzberg. It’s an area which has built up, since the Wall came down, a working class and heavily Turkish community. But now large chunks of it are being gentrified, and corporations are throwing up huge, glitzy temples to consumption like O2world which actually tore down a section of the remaining Berlin Wall, which is regarded as a precious artifact, and did so right in the East Gallery area, which is the area where the Wall displays spectacular street art as a testament to the creativity of this community, just so tourist boats could see O2world from the river Spree. Nearby on the side of a tall apartment complex in enormous lettering is a telling response: “F*ck Media Spree”. Media Spree is the name for the complex of corporate giants that are closing down local artist galleries and complexes to get the land. I was in Kreuzberg a few times. Once, I was on a street art walking tour, learning to interpret the story, messaging, and symbology of Berlin street art. I like walking tours and biking tours, because the act of touring has the least cultural impact, unlike giant red buses or huge river boats that shine floodlights on the people enjoying an evening on the canals. You see this all over Europe and it’s culturally cheap and hideous.

A young Turkish man and his German girlfriend were walking by and he flipped us off saying, “F*cking tourists. Go home.” or something like that. The guide made some excellent points. First, this is a reaction to what some see as driving things like Media Spree. After all Berlin has been bankrupt twice and it can’t afford to say no to big corporations who want to do gaudy Walmart-like things, and these things are also directly connected to tourism which is Berlin’s *primary* industry. The place is like Jerusalem during the Crusades, with all the cultural blight that brings. The young man had a point, in other words, but it was also at least partially deficient. After all, he wasn’t born there either, either in the neighborhood, nor in Berlin. When he was a baby, the place was East Germany. That, of course, wasn’t the only obvious deficiency in the argument. But he’s not alone. There’s an occupy movement camp there, full of Turkish mothers protesting the changes. That part of Kreutzberg is trying to hold on to its identity as working class and as mostly Turkish. The apartment complexes are dotted with satellite dishes bringing in Turkish TV and maintaining the connection and identity. Lately there’s an influx of Arabic population, and the Turks and Arabs don’t generally get along, so this is also raising the tension level.

Some of the other neighborhoods we’ve spent time in include Friederichshain, which has a lot of students and is fairly low cost. You can feel some of the Kreutzberg vibe there in both directions, the post-partition neighborhood and the new gentrification as well. Prices range from dirt cheap to pricey and pretentious. Schoeneberg includes the most well known gay district, and has both expensive things and cheap as dirt things, depending on what you want and where. Prenzlauer Berg is a trendy neighborhood which is where we had breakfast every morning, and the shopping, while sometimes pricey often includes sales, and is nothing like the Dolce priced Mitte. Charlottenberg is OK for some things too, though I wouldn’t call it a mecca of anything in particular, unless you’re into the brothels, etc.

Most of my photos in Europe are not the typical tourist fare. I like interesting portals and doorways (including bridges, openings, and fenestrations) and odd communiques and signs (including street art). I’m also interested in urban exploration, which is entering abandoned buildings, tunnels, stations, factories, and other urban and industrial locales, to explore, ruminate on the meaning of a place in the context of its neglect and what a place looks like when people are indifferent to it, and of course take photos. I could care less about getting yet another photo of the Brandenberg gate, which I can get on Google, or a photo of me in front of it, as though touching the famousness of another blarney stone augments my identity in some way. There may be some historical interest. I did go to Luftwaffe Headquarters, a Nazi architectural example now appropriately the Ministry of Finance (they just changed the name over the door), but it’s because I wanted to step into the shadow of it and feel some of what people felt there which, with Nazi architecture, is a bit like K in Kafka’s tales, namely powerless in the face of an all consuming state and bureaucracy. I wanted to absorb the desolation of the place and be able to compare it conceptually and in terms of meaning with things in my own cultural frame of reference. I took photos there to aid in memory.

More than anything I photographed street art. There is the usual graffiti tagging everywhere, which is about ‘look at my name, I matter, please tell me I matter’, but the street art is also everywhere, and that’s about all kinds of things, including social critique and humour. My favorites are a pair of security cameras that have names and talk to each other. You can find these all over the city. They’re poking fun at the security cameras everywhere.

In Mitte, if you want an excuse to go besides gawking at overpriced designer handbags, visit the Monster Cabinet, which is located in a protected artists enclave that has some of the best street art in the city, though by no means the largest concentration of great art. The place is the factory operated by the man on whom Schindler’s List is based. When the Wall came down people abandoned their properties to go over to the West, and the artists, anarchists, punks, and leftists came over from the West and took them over. Gentrification made it the highest rent in the center of Berlin, driving the artists back out, but th e discovery of this factory or workshop earned it protection. The Monster Cabinet is an underground park of hydraulic monsters, and you go through in a tour for currently five euro. It’s also included in the wonderful Twilight Underground Berlin tour, but that one, in general, is not for kids, the delicate, or flip flops. I like tours, if they are on foot or bike, and if they’re not the standard fare.

That brings me to the abandoned mental hospital. As I said, not for the delicate. Flashlights only, flooded at ground level, and broken glass in every window, besides what’s on the floors. We went from basement to roof, besides exploring the corridors. It was actually my favorite couple of hours in Berlin. We also went to a hacker-space, which is common worldwide, but which seems to have emerged originally in Berlin, but it wasn’t really my cup of tea. People think because I know and use technology reflexively and continually that I’m a geek, but it just isn’t me. I don’t care about tech for its own sake. I much more enjoyed walking through some of the semi-‘underground’ night clubs, including whole compounds of them, and looking at the street art on the walls. I’ll upload photos to Facebook, but even looking at Google Earth, it’s impossible to grasp the extent to which Berlin is painted until you walk where the Google trucks don’t go. These night clubs, incidentally, don’t really get underway until midnight, or no earlier than 11pm. Most people go at 2am, and of course, since the trains stop running about 1am, they stay through the night. A lot of these places are outdoors, as well.

Speaking of which, the Berlin attitude about alcohol is much less controlling than in the middle and Southern states in the US, if not altogether. You can buy a beer at a bar, walk around the city drinking it, and even get into a car (as a passenger) and finish it there. Sex is also generally not controlled by the government, which is why Berlin is Europe’s sex capital, even more than fabled Amsterdam. Since prostitution is legal, brothels are in every neighborhood, sex clubs are international destinations and night clubs based on the most direct orgiastic behavior, often with participation *required* are commonplace, advertised as such, and advertised in such a way that it’s virtually unimaginable in a place like Las Vegas or really anywhere outside Europe. France, by contrast, is far more restrictive.

Again, the cigars are a great deal. Cubans for two Euros. You can get them at Durek in Alexanderplatz or Haupstbahnhoff for instance, where there are walk in humidors. I find it ironic that Reagan once said “Mister Gorbacev, tear down this wall.” and yet the US still maintains a wall with Cuba’ on the pretext that they’re a Soviet power, even if there are no Soviets. One forum poster called them “the enemy”. There are even a lot of the ideological heirs of Reagan who want to build the US’s own Berlin Wall along the border to Mexico. How silly and retarded, culturally retarded, this all looks through European eyes is hard to overemphasize. So I have to travel to a place where people can mate with whom they choose, pedestrians can drink and walk at the same time, and Cuban cigars are not any more special than the ones from the US’s drug running, gun running, and corporate sweat shop allies that Reagan’s CIA propped up with fascist dictators who ‘disappeared’ quotas of left leaning villagers for the US while the president decried the same tactics by the Socialists. I think I *prefer* Cuban while I’m in Europe.